Liam is a vastly experienced drummer and musician, who joined the Music Hub in 2009 and has drums and percussion teaching experience stretching back to 2003.  He began playing musical instruments aged four, and finally got to make a start on his chosen instrument of drums aged 12, studying initially with a teacher from the local Music Service throughout his time in high school and sixth-form.

He is a well-established and versatile performer in several settings, from jazz, theatre and brass band, to various styles of heavy rock.  This experience encompasses studio recording, live and touring work across Europe.  Credits include theatre shows at The Montgomery Theatre in Sheffield, The Acorn Theatre in Worksop, as well as studio recording for several original bands.

Examples of live work include concerts and tours all across the UK, a tour of Germany, playing shows in Krefeld, Munich and Berlin, and also live work with Servers (Undergroove Records), where Liam was required to learn a full set, programmed to click, with two rehearsals, before performing on the main stage at The Corporation to a packed house!

Liam’s “regular” gig is with the band Dead End Street, who play covers by bands such as The Kinks, The Beatles, The Who etc.  He has also been a member of Bramley Brass Band since the age of 14 and in 2018 was asked by the band to take on the role of assistant director, leading and conducting the band in rehearsals and concerts.

Liam specialises in one-to-one drum kit lessons, where he aims to share his passion for the instrument and music in general.  In addition to this, he is an assistant director/percussion support for the intermediate and advanced wind bands run by the Music Hub.

His philosophy to learning drums is to develop a range of musical skills, both reading music and playing by ear, improvising, group and ensemble playing, while giving the option of Rockschool graded exams.  Liam also believes that learning is a lifelong endeavour, and is still striving to become a better drummer and educator, so occasionally has lessons with other renowned drummers.  For example, in 2017, Liam was thrilled to be able to have a session with Steve White (The Style Council, Paul Weller, The Family Silver), which opened up several new methods and ideas.

In his spare time, Liam dabbles with a bit of trombone playing, among other large brass instruments, and is a keen rugby fan and cricketer! 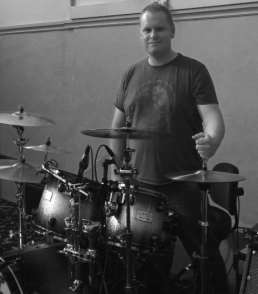