Born in Sheffield in 2002 to parents who, if not accomplished musicians themselves, have always fostered a love and enjoyment of music in their children, I remember often listening my siblings practising their instruments, or singing along with them to their favourite CDs, and the highlight of the extended Thickett family calendar was always carolling together each December at my Auntie Dorothy’s in Stocksbridge. So desperate was I to participate in the family tradition (and to compete with my brothers’ several year head-start playing clarinet and alto sax respectively), that I insisted on learning an instrument at the earliest opportunity, taking up cello in 2009, and around the same time became one of the first choristers in a new choir at St John’s, Ranmoor.

Nevertheless, the cello was soon swapped for my sister’s old clarinet, and shortly after, I became involved in my first Music Hub ensembles, initially a wind band, and later Alley Kittens. I also began my seven-year membership of Sheffield Young Singers, with whom I would sing twice at the Voices Now Festival in London’s Roundhouse. On entering secondary school, I began learning piano to support my new interest in composition, and followed my brothers in starting at Sheffield Music School, where I later undertook Grade 8 Theory, and performed chamber music including a vocal quartet and saxophone quintet of my own. I have played tenor saxophone since attaining Grade 5 clarinet in 2015, enabling me to perform in Tapton’s jazz band and their pit band for Fame the Musical, and, most importantly, Festival Band, through which I have steadily worked my way forwards via “2nd Saxophone-masquerading-as-a-Trombone,” Tenor Sax and 1st Alto Sax, to eventually land on 1 st Clarinet. I progressed into Alley Cats at a similar time, and was lucky enough to play with both ensembles on tour in Leipzig in 2018, as well as playing clarinet and bass clarinet in Senior Orchestra for two years.

Having played in Fame, and sung one of my compositions in public for the first time at an SYS concert the year before, Peter Pan and Wendy became the first of three school productions for which I would act as Musical Director, writing and arranging music. During the year, I also wrote pieces for Ensemble 360, as part of the Powerplus project, and Juice vocal trio at the Sound and Music Summer School. Subsequently, I have been shortlisted in the BBC Young Composer of the Year and Janet Altman competitions, won a University of Sheffield trio-writing competition, and had three pieces programmed in Classical Sheffield 2019, including a commission for Sheffield Singers and Sheffield Junior Singers.

Over the past two years, I have studied Music, English Literature, Maths and Further Maths at King Edward VII Sixth Form, alongside conducting their upper voice choir, singing in SATB choir and Barbershop, and playing in Concert Band. In November 2018, I was awarded a place as an Alto in the National Youth Training Choir (and have since successfully auditioned for the main National Youth Choir), and have now returned to St John’s, singing 2 nd Soprano with the Consort and Songmen.  Thanks to my wonderful teacher, Helen Perry, I have also achieved Grade 8 in Singing, Clarinet, Alto and Tenor Saxophone, and am currently practising for my virtual Grade 8 piano exam. In the Autumn, I hope to read Music as a choral scholar at Merton College, Oxford, with a view to singing or composing professionally. 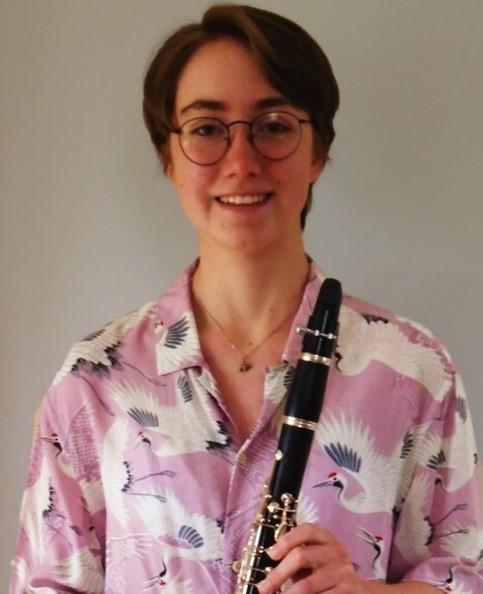